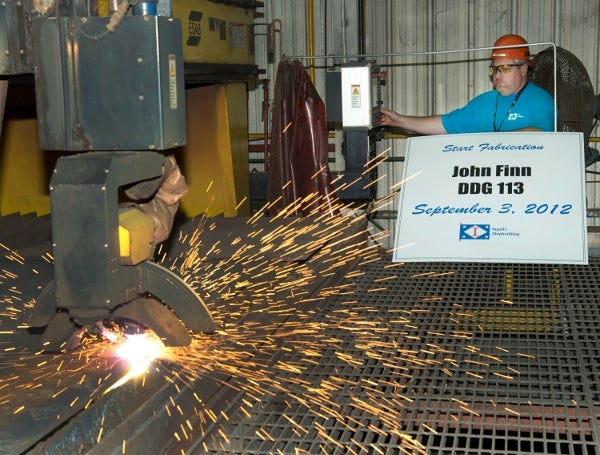 More than 100t of steel has been cut for the fabrication of the vessel.

USS John Finn, named after a Medal of Honor recipient, will be equipped with weapons to enhance maritime defence capabilities for the US Navy.

Powered by four gas-turbine propulsion engines, the Arleigh Burke-class guided missile destroyer will feature SPY-1D multi-function phased array radar to support a variety of operations, ranging from peacetime presence and crisis management to sea control and power projection for the US Navy.

"USS John Finn, named after a Medal of Honor recipient, will be equipped with weapons to enhance maritime defence capabilities for the US Navy."

Designed for survivability, the 156m-long John Finn has a full load displacement capacity of 9,217t, a beam of 20m and can cruise at a speed of 31k.

DDG 113, the first of the DDG 51-class programme continuation ships, is scheduled for delivery to the US Navy in the third quarter of 2016, while Ralph Johnson (DDG 114), Rafael Peralta (DDG 115), and Thomas Hudner (DDG 116) destroyers are currently undergoing construction at Ingalls Shipbuilding.