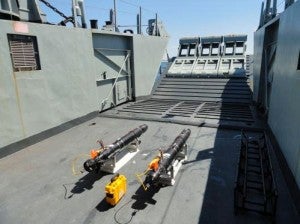 EdgeTech has successfully delivered 12 littoral mine countermeasure sonar (LMCS) systems to the Indian Navy, as part of a previously signed contract.

Prior to the award, EdgeTech’s advanced sonar system has undergone testing with a side scan sonar manufacturer and demonstrated its superior performance while exceeding all the trial requirements of the Indian Navy.

Featuring dual detection and classification capabilities, the LMCS system has been configured to meet the requirement of the Indian Navy and to work with SeeByte’s SeeTrack automated target recognition (ATR) software.

SeeByte’s SeeTrack Military software has been designed for rapid onsite analysis and fusion of sensor data and can be used within numerous military and security exercises, surveys and operations.

Designed for change detection, high-speed/long-range surveys, mine countermeasures (MCM) and mine-like target detection and classification, the LMCS system will be deployed onboard the Indian Navy’s Pondicherry-class minesweeper vessels, as well as on other non-MCM vessels.

Advanced mine and underwater improvised explosive device (IED) hunting system, LMCS can be installed onto a variety of vessels, including small boats, unmanned surface vehicles (USVs) and larger patrol craft.

Capable of cruising at a speed of 16k, the Pondicherry-class ships have a full load displacement capacity of 804t, length of 61m, beam of 10.2m, and can accommodate a crew of 82, including ten officers.