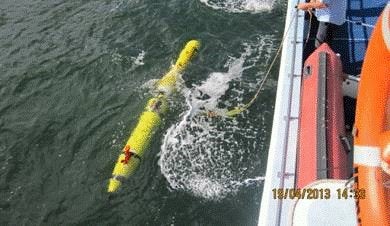 The InSAS has also demonstrated its capability in deeper water tests, conducted from HMAS Creswell in Jervis Bay.

Kraken president and CEO Karl Kenny said that the AquaPix has performed trials in less than two weeks meeting all the performance expectations as well as meeting the programme delivery schedule and budget.

AquaPix has been designed to provide cost-effective and ultra-high-resolution seafloor imagery at significantly longer ranges than conventional sonar in support of mine countermeasures, Q-route surveys, wreck searches, cable/pipeline survey missions.

"Synthetic Aperture Sonar technology is a true breakthrough and will radically improve the efficiency and accuracy of seabed imaging for both military and commercial applications."

"Synthetic Aperture Sonar technology is a true breakthrough and will radically improve the efficiency and accuracy of seabed imaging for both military and commercial applications," Kenny added.

Additional applications of the InSAS include hydrographic survey, subsea surveillance of strategic assets, habitat mapping, cable and pipeline route survey and a wide variety of other seabed imaging applications.

The system will be used by the Royal Australian Navy (RAN) to improve accuracy and better decision-making when conducting various imaging and surveillance missions.