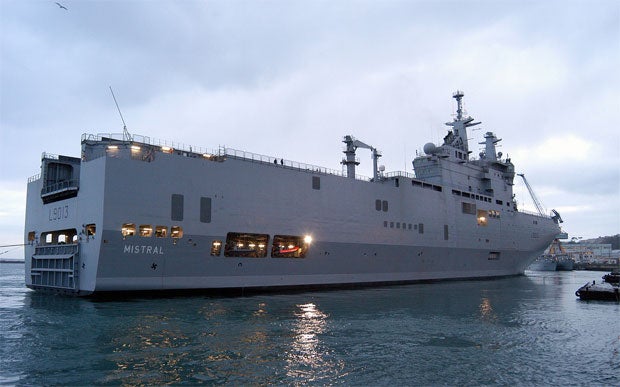 Built at the DCNS shipyard in Saint-Nazaire, the Vladivostok is scheduled to begin sea trials in March 2014, according to RIA Novosti.

DCNS programme manager Yves Destefanis said: "The ship will be handed over unarmed, but equipped with French-made landing equipment."

Prior to delivering to Russia’s Pacific Fleet in November 2014, the ship will be integrated with additional Russian systems at the Severnaya Verf shipyard in St. Petersburg.

The Russian defence ministry had signed a $1.6bn contract in June 2011 for the procurement of two Mistral-class aircraft carriers from France.

Sevastopol, the second ship of the class, is expected to be floated out in October 2014.

According to the Russian Defense Ministry, the first two Mistral-class warships will be based in the Far East ports of Vladivostok and Petropavlovsk-Kamchatsky, upon commissioning into the fleet.

"The ship will be handed over unarmed, but equipped with French-made landing equipment."

The Russian defence ministry’s procurement department director Andrei Vernigora said final decision on construction of the third and fourth Mistral-class ships will be based on the testing results of the Vladivostok.

The 199m-long, 22,000t Mistral-class ships feature MRR-3D NG surveillance radar and a high-performance communications suite to support humanitarian operations and a variety of other missions.

French-built Mistral-class ships can accommodate a crew of 450 and 16 helicopters and is also fitted with Thales ARBR 21 radar warning receiver.

Image: A Mistral-class warship stationed at a base. Photo: file image.