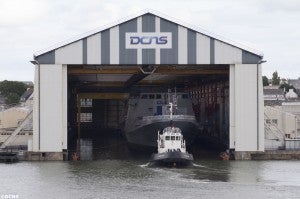 DCNS has rolled out the French Navy’s third Aquitaine-class FREMM multi-mission ship, Provence, from the building dock at its Lorient facility in France.

Construction on the vessel began in December 2010 and it is due to be fitted with masts, sensors, radars, antennas, cameras and jammers by DCNS specialists and subcontractor teams.

The French FREMM frigates will be built in two mission versions where nine ships will feature ASW and shore bombardment enhanced capabilities, and two will have torpedoes, vertical-launch self-defence missiles and an active towed array sonar.

"The 142m-long French Navy’s FREMM frigate has a displacement capacity of 6,000t."

Capable of accommodating a crew of 145 with a complement crew of 108, the 142m-long French Navy’s FREMM frigate has a displacement capacity of 6,000t, can cruise at a speed of 27k and has a range of 15k.

The French Navy had received the first FREMM frigate, Aquitaine, in November 2012 and the second vessel in its class, FREMM Mohammed VI, is expected to be delivered to the Royal Moroccan Navy in late 2013.

Normandie, the second FREMM ship for French Navy will begin sea trials in near future while construction on the French Navy’s fourth FREMM frigate, Languedoc, will start shortly.