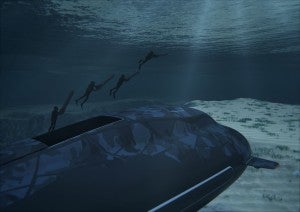 Capable of enduring long periods and conducting missions in water less than 15m deep, the SMX 26 features two shaft-lines, four steerable and retractable azimuth thrusters to provide extreme manoeuvrability, as well as ability to maintain steady position near the bottom.

As well as its long discreet surveillance capability, the SMX 26 is equipped with an extendable wheeled undercarriage system to enable quick landing on all types of sea bed and deploying hoses to the surface for air and power.

The SMX 26 is integrated with sensors to support missions, including six special forces divers deployed during a dive or at the surface to identify moving targets.

"The new submarine is armed with two mast-mounted weapon systems, with a 20mm cannon and a missile launch container for anti-aircraft self-defence."

The new submarine is armed with two mast-mounted weapon systems, with a 20mm cannon and a missile launch container for anti-aircraft self-defence, as well as two heavyweight and eight lightweight torpedoes with heavy warheads.

A new anti-aircraft self-defence weapon system for submarines has also been introduced by the company, aimed to help navies to protect their vessels against airborne threats worldwide.

Integrated within the Subtics combat system, the mast-mounted anti-aircraft self-defence system features a retractable mast to support a turret, which comprises several Mistral short-range missiles; whereas the UUV is equipped with a Mica medium-range missile.