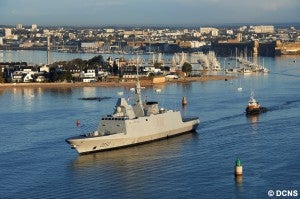 The DGA was represented by European Joint Armament Cooperation Organisation, OCCAR, which on behalf of the agency is responsible for the delivery contract of 11 FREMM frigates to the French Navy.

DCNS is under contract to build 12 FREMM ships, with 11 of those for the French Navy and one reserved for the Royal Moroccan Navy.

Two of the 12 frigates will be equipped with torpedoes, vertical-launch self-defence missiles and active towed array sonar, while the remaining ships will feature ASW and shore bombardment enhanced capabilities.

The second FREMM vessel, Mohammed VI, is expected to be delivered to the Royal Moroccan Navy in 2013, while the third ship of the class, Normandie, is currently undergoing outfitting.

The fourth fifth and sixth frigates are under various stages of construction.