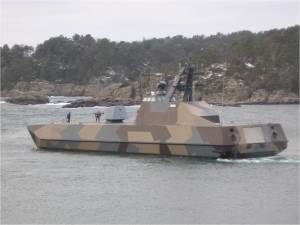 Skjold Prime consortium, which consists of DCNS and two Norwegian contractors, was awarded a contract by the navy to design, develop and deliver six Skjold-class FPBs.

DCNS was serving as the combat system design authority and co-supplier, while the two contractors are Umoe Mandal and Kongsberg Defence & Aerospace.

The 50m-long Skjold FPB is integrated with a combat system, communications systems and sensor suites to support maritime security and safety missions in Norway’s littoral waters even in adverse environments.

In addition, the boats are armed with eight Kongsberg Nye Sjoemaals Missiler or Norwegian strike missile (NSM) anti-ship missiles and an Oto Melara 76mm Super Rapid gun with a range in excess of 12km that is capable of engaging several targets simultaneously.

Capable of cruising at speeds in excess of 55k, the vessel has a full load displacement capacity of 270t and a draught of 0.9m to 2.3m, enabling it to access very shallow waters unlike other craft.

P964-Glimt and P965-Gnist, the fourth and fifth vessels of the class, have been delivered to the navy in March and November 2012 respectively.

DCNS has also served as the prime contractor for the modernisation of 14 Hauk-class FPBs for the Norwegian Navy between 1997 and 2004.