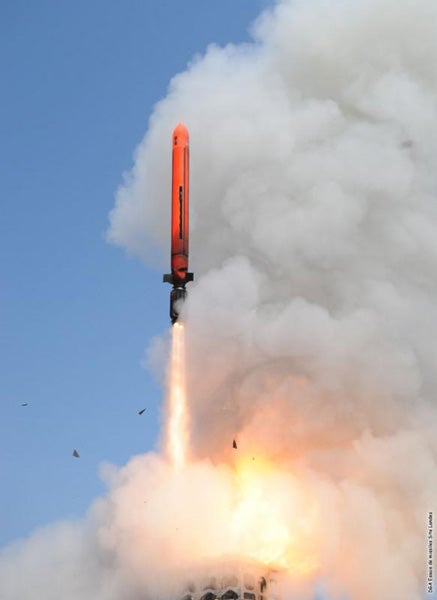 DCNS has tested loading of a model of the Missile de Croisière Naval (MdCN) naval cruise missile in cooperation with the French Navy crew of the third Frégate Européen multi-mission (FREMM)-class frigate Normandie.

During the loading trials, conducted at the company’s dockyard in Lorient, Brittany, France, the DCNS technicians and French Navy crew demonstrated the loading of a model of the MdCN naval cruise missile.

The crew’s ability to safely load the cruise missiles of board the FREMM frigates has also been demonstrated as part of the trial.

DCNS FREMM programme manager Anne Bianchi said: "Talks are ongoing with government services to set up a first firing of the MdCN from the ship, which could take place as early as this year."

MBDA received a contract from the DGA in 2006 for the supply of 200 MdCN naval missiles for installation on to the French Navy’s Frégate Européen multi-mission (FREMM) ships and its Barracuda nuclear-powered attack submarines by 2014 and 2017 respectively.

"Talks are ongoing with government services to set up a first firing of the MdCN from the ship."

The naval variant of the Storm Shadow / SCALP air-launched cruise missile system is being developed in two configurations; the first being a vertical launch from the FREMM vessels using the compact A70 vertical launcher, while the other is a submarine configuration, where the weapon can be launched through torpedo tubes.

The MdCN missile, capable of destroying infrastructure targets of high strategic value, underwent its first in-flight test from a vertical launcher in May 2010, while the first submarine trial was conducted successfully in June 2011.

The loading trial has been conducted at request of the French Direction Générale de l’Armement’s (DGA), with the assistance of MBDA, the developer and supplier of the missile as well as the launcher installation.