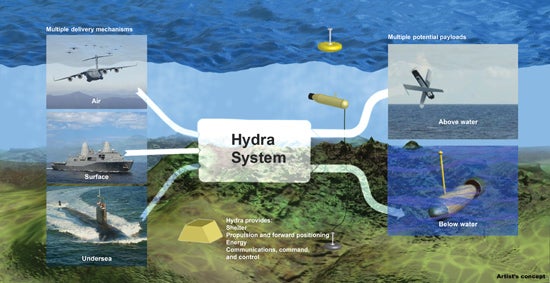 The US Defense Advanced Research Projects Agency (DARPA) has launched a new Hydra programme, intended to help develop a distributed undersea network of unmanned payloads and platforms to complement the US Navy's manned vessels.

The Hydra programme has been designed to integrate existing and emerging technologies to build an alternate way of delivering a variety of payloads close to the point of use.

DARPA programme manager Scott Littlefield said: "An unmanned technology infrastructure, staged below the oceans' surface, could relieve some of that resource strain and expand military capabilities in this increasingly challenging space."

"By separating capabilities from the platforms that deliver them, Hydra would enable naval forces to deliver those capabilities much faster and more cost-effectively wherever needed," Littlefield said.

In addition to developing and demonstrating an unmanned undersea system, the programme will provide a novel delivery mechanism for deployment of unmanned air and underwater vehicles into operational environments.Using modular payloads within a standardised enclosure, the Hydra system will allow scalable, cost-effective underwater installation of rapid response assets for the navy.

"An unmanned technology infrastructure, staged below the oceans' surface, could relieve some of that resource strain."

The modular payloads would provide key capabilities such as intelligence, surveillance and reconnaissance (ISR) and mine counter-measures (MCM).

"It is envisioned to work across air, underwater and surface operations, enabling all three to perform their missions better," Littlefield further said.

A communications suite of Hydra would enhance manned platforms effectiveness and would also enable remote control from over-the-horizon to significantly improve operational reach.