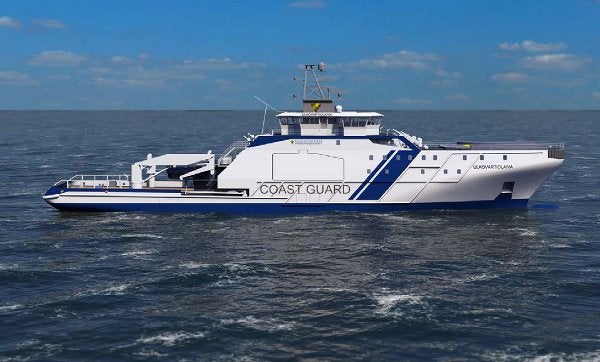 Construction on the Finnish Border Guard’s new offshore patrol vessel (OPV) has started with the keel laying at STX Finland Oy’s Rauma Shipyard, as part of an agreement signed on 21 December 2011.

Built by STX Finland, the new OPV is expected to boost Finland’s maritime search-and-rescue capabilities, especially during events that lead to multiple consequences.

The 96m-long and 17m-wide vessel, which has yet to be named, will feature advanced, environmentally friendly technologies to meet government requirements for decision-in-principle on sustainable public procurement.

STX Finland Oy’s Rauma Shipyard director Toivo Ilvonen said: "Now it is time to begin the assembly of the ship’s hull, and thus the ship will gradually find its final form by the end of July."

Scheduled for delivery in November 2013, the OPV will be powered by liquefied natural gas (LNG) and diesel, for energy efficiency and safe operations to suit individual accident situations.

"The new colour scheme of the vessel has been designed to provide support for our operations on the open sea, in an international operating environment."

Capable of supporting a variety of underwater assignments both independently and in collaboration with other authorities, the vessel will be used by the Finnish Border Guard to conduct border safety and frontier supervision missions, such as maritime search-and-rescue and military national defence.

In addition to damage control capacity to ensure reliability of operation at sea, the ship will feature emergency towing capabilities for enhanced protection of sea transport from damage.

Finnish Frontier Guard headquarters technical department navy chief captain Jukka Jaakkola said: "The new colour scheme of the vessel has also been designed to provide support for our operations on the open sea, in an international operating environment."

Cassidian has been awarded a contract to deliver and integrate its TRS-3D naval radar on board the new OPV by mid-2013.