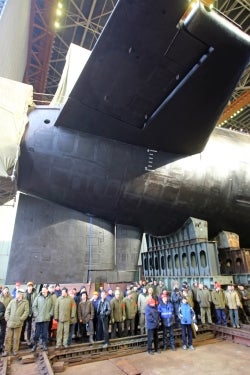 As part of a state 2020 rearmament procurement programme, the Russian Navy placed orders for the construction of eight Borey-class submarines, which are expected to be complete by 2015.

The first of three Borey-class submarines, Yury Dolgoruky, is currently undergoing sea trials, while the second and third submarines, Alexander Nevsky and Vladimir Monomakh, are under construction at the Sevmash shipyard on the Kola Peninsula, Russia.

Powered by an OK-650 nuclear reactor, an AEU steam turbine, a shaft and a propeller, the Yury Dolgoruky submarine is scheduled to be operational with the Russian Navy before the end of the year.

"The Yury Dolgoruky submarine is scheduled to be operational with the Russian Navy before the end of the year."

Construction of the submarine will cost a total of $713m, which includes research and development expenditure of $280m.

The fourth-generation Borey-class submarines are expected to form the core of Russian modern strategic naval fleet by 2020 and will be armed with Bulava (SS-NX-30) sea-based intercontinental ballistic missiles (ICBM).