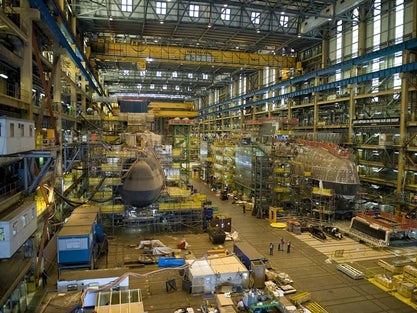 Built by BAE Systems, the submarines can cruise at a submerged speed of 29k, while carrying a crew of 98 and armed with 36 torpedoes and missiles, including Tomahawk cruise missiles, Spearfish torpedoes and mines with six 533mm torpedo tubes.

MoD submarines director rear admiral Simon Lister said the sixth Astute-class submarine is expected to be built quicker and more efficiently than its predecessors and demonstrate the re-establishment of the national submarine-building capability in Barrow-in-Furness.

Powered by a nuclear reactor to operate for 25 years without refuelling, the 93m-long, 11.3m-wide submarines will eventually replace the Royal Navy’s existing Swiftsure and Trafalgar-class vessels.

"It will secure around 5,000 jobs at BAE Systems and thousands more in over 400 suppliers across the UK submarine supply chain."

Defence Equipment, Support and Technology minister Philip Dunne said the UK Ministry of Defence (MoD) has also signed a new contract with BAE which will save £380m over the next eight years to ensure that the Royal Navy’s submarine capability is delivered efficiently.

"By ensuring the UK’s submarine programme remains affordable, this new contract will help deliver the Astute-class, pave the way for the future successor nuclear deterrent submarines, and secure around 5,000 jobs at BAE Systems and thousands more in over 400 suppliers across the UK submarine supply chain," Dunne said.

The first and second submarines of the class, HMS Astute and HMS Ambush are both nearing the completion of their extensive sea trials and have been delivered to the Royal Navy to start preparation for operations.