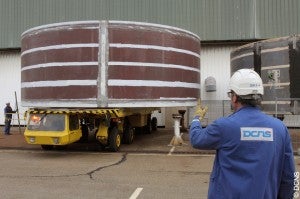 The first pressure hull ring of the French Navy’s third Barracuda-type nuclear-powered attack submarine, SSN Tourville, has been completed at DCNS’s Cherbourg centre, France, one month ahead of schedule.

Completion of the ring marks a step forward in the Barracuda submarine programme, with three vessels currently at various stages of construction.

Twenty one steel rings comprise the pressure hull of a Barracuda submarine, with the rings 3m-long and 9m in diameter.

The first hull ring forms part of the aft has been designed to store the vessel’s powerplant.

The French Délégation Générale pour l’Armement (DGA) had placed an order with DCNS and Areva-TA in December 2006 for development and construction of six Barracuda-class submarines.

Construction contracts for the first, second and third submarines of the class, SSN Suffren, SSN Duguay-Trouin and SSN Tourville, were awarded to the team in 2006, 2009 and 2011 respectively.

Capable of accommodating a crew of 60, the 85m-long submarines have a surface displacement capacity of 4,100t, a diving depth of more than 350m and can cruise at a speed of 25k.

The six vessels are scheduled to be delivered to the French Navy between 2017 and 2027 to replace four SSN Rubis submarines and two SSN Amethyste-class submarines.