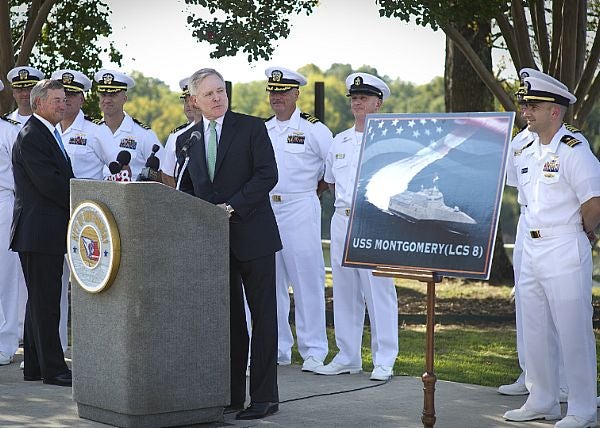 Construction on the US Navy’s eighth Independence-variant littoral combat ship, the future USS Montgomery (LCS 8), has started at Austal’s facility in Mobile, Alabama, with the official keel laying ceremony.

Named to honour the capital of Alabama, the 419ft-long USS Montgomery will provide warfare capabilities for mines, anti-submarine and surface, as well as operational flexibility for the US Navy.

Austal has been awarded a $3.5bn contract by the US Navy to build and deliver an additional ten LCSs to join USS Independence (LCS 2), which was commissioned in January 2010.

Austal Shipbuilding Gulf Coast supervisor captain Stephen Mitchell said the LCS ships would provide flexibility and for the troops, in addition to a greater range of options.

General Dynamics Advanced Information Systems has partnered with Austal for the LCS programme and is responsible for design, integration and testing of the ship’s electronic systems for combat, networks, and seaframe control.

The high-speed, highly manoeuvrable combat ship has a full-load displacement of 2,637t, an operational range of 4,300nm and can cruise at a speed of 40k.

Powered by two LM2500s arranged in a combined diesel or gas turbine configuration with two diesel engines, the 127m-long aluminum trimaran ships can operate for an extended period either with a battle group or through a forward-basing arrangement.

The US Navy intends to procure a total of 55 LCSs for multi-mission support to establish and maintain its dominance in the littorals and sea lanes of communication choke points worldwide.

The US Navy is scheduled to receive fast, agile surface combatant, USS Montgomery in 2016.