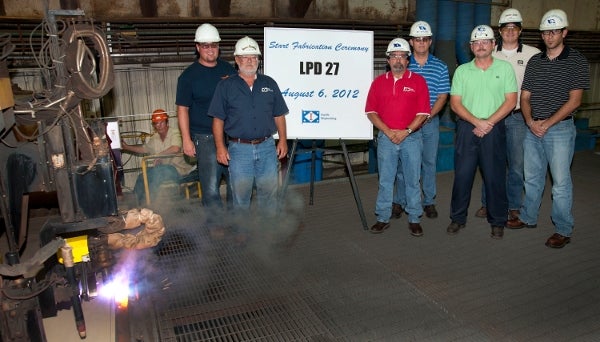 Ingalls LPD programme vice president Doug Lounsberry said: "Lessons learned and production improvements from all the previous LPDs have been incorporated into LPD 26 and are being rolled over into LPD 27."

Under the $1.5bn contract awarded recently to HII for detail design and construction of the LPD 27, fabrication work will be followed by keel laying currently scheduled to take place in the second quarter of 2013.

With a displacement capacity of 24,900t, the 684ft-long, 105ft-wide San Antonio-class ship can accommodate 800 troops and provide combat support for the US Navy and US Marine Corps.

“Lessons learned and production improvements from all the previous LPDs have been incorporated into LPD 26 and are being rolled over into LPD 27.”

In addition, the vessel will feature enhanced fighting capabilities, such as advanced command-and-control suite, and increased lift-capabilities for carrying vehicles cargo. It will also help transport combat and support elements of marine expeditionary units and brigades.

The navy has received six of 11 LPDs to date, while the remaining vessels are currently under different stages of construction.

Delivery of the new vessel is scheduled for mid-2017.