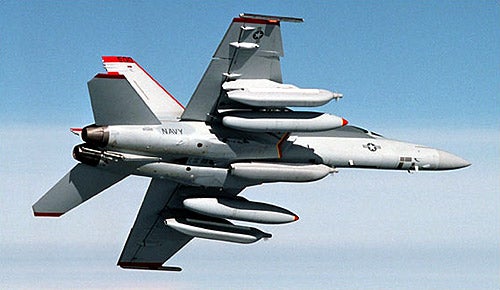 The US Naval Air Systems Command (NAVAIR) has awarded a follow-on contract to Cobham to deliver the AN/ALQ-99 low band transmitter-antenna group (LBT-AG) in support of the navy and marine corps’ EA-6B Prowler and EA-18G Growler aircraft.

Work will be carried out at Cobham Defence Electronics’ facility in Lansdale, Pennsylvania, US, and is scheduled to complete by May 2015.

"The LBT has been specifically designed to disrupt enemy radar and communications and protect strike aircraft, ships and ground troops."

Cobham-built LBT is equipped onboard the US Navy’s EA-6B Prowler and EA-18G aircraft and the EA-6B aircraft of US Marine Corps for use in combat operations.

The LBT has been specifically designed to disrupt enemy radar and communications and protect strike aircraft, ships and ground troops.

Boeing-built EA-18G Growler airborne electronic attack (AEA) jets can operate from either an aircraft carrier or from land bases.

Northrop Grumman-built EA-6B Prowler is a twin-engine, electronic warfare aircraft and has been primarily designed to jam and intercept enemy radar and communications, as well as perform electronic surveillance.

The company has delivered 230 transmitters to date, while the latest contract brings the total number of production orders to 314 of 337 required transmitters.