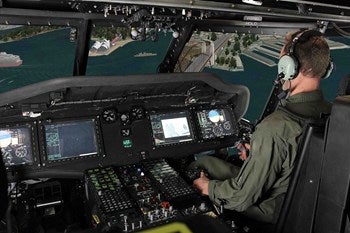 The US Navy has awarded a contract to CAE to design and develop two MH-60R Seahawk tactical operational flight trainers (TOFT) for the Royal Australian Navy (RAN).

Under the contract, CAE will design, manufacture and deliver two TOFTs for installation at HMAS Albatross, also known as Naval Air Station (NAS) Nowra, by 2015.

RAN’s MH-60R TOFTs include a full-motion operational flight trainer (OFT) to train navy pilots and co-pilots, as well as a weapons tactics trainer (WTT) to train rear-crew sensor operators in the helicopter.

Capable of being used as a standalone training unit, the MH-60R OFT and WTT can also serve as a networked device to provide a total aircrew mission training system.

As part of the AIR 9000 Phase 8 requirements, Australia had selected the MH-60R Seahawk helicopter as its new multi-role anti-submarine and anti-surface warfare combat aircraft and is acquiring a total of 24 through the US foreign military sale programme.

Image: MH-60R TTOT simulator being operated by a trainer. Photo: courtesy of CAE.