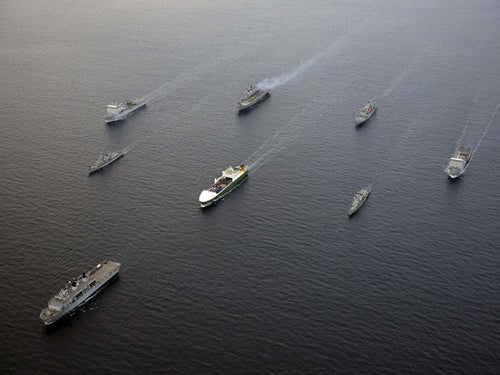 The UK Royal Marines and Albanian Armed Forces have begun a large-scale exercise, dubbed Exercise Albanian Lion 2013, the first in a series of exercises planned under Cougar 13 operations.

During the exercise, conducted in Adriatic, off the coast of Vlore, Albania, nearly 1,000 Royal Marines and their Albanian counterparts will conduct a series of mock assaults on enemy positions near Biza to enhance amphibious warfare skills.

The drill involves four warships and five support vessels from the Royal Navy as well as personnel from the Royal Marine unit, the Lead Commando Group (LCG) of 42 Commando.

Companies Intelligence
View All
Reports
View All
Data Insights
View All
"We have enhanced our contribution by providing a larger force comprising of fast jets, helicopters, assault boats and armoured personnel carriers."

British personnel will also conduct military operations at sea and on land in evacuation operations, naval landing, shooting exercises, and other missions during the one month deployment in Albania.

The multiple scenario exercise will be performed in a wide geographical range, from training area in Biza, to Pashaliman, Kuçova, Karaburun and Sazan, as well as enabling the officers and military personnel of both the nations to work together, in the framework of the Euro-Atlantic Alliance.

Cougar 13 is a long-planned deployment for the UK Response Force Task Group (RFTG), a naval force formed under the 2010 Strategic Defence and Security Review.

The Cougar 13 deployment will operate in the Mediterranean, Red Sea, Arabian Gulf and The Horn of Africa.