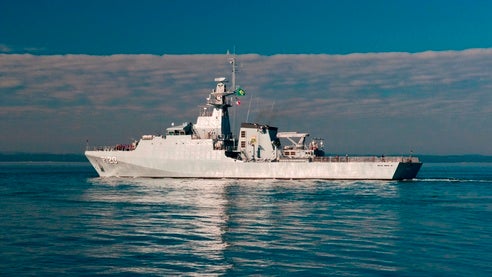 The FOST training programme included navigation, training, development and familiarisation of operational procedures for safety and security in areas; this included ship’s material assessment, emergency exercises and machinery breakdown drills, as well as boarding operations and anti-piracy exercises and tactics.

The Brazilian navy had taken delivery of the first OPV from BAE in June.

Lieutenant-commander Giovani Correa, Brazilian Navy commanding officer of Amazonas, said: "The FOST training was a great success and allowed us to learn more about the Royal Navy’s procedures as we continually develop our own for this new class of ship."

“The FOST training was a great success and allowed us to learn more about the Royal Navy’s procedures as we continually develop our own for this new class of ship.”

The navy had awarded a $186m deal with BAE for the purchase of three OPVs, originally built by BAE for the coast guard of Trinidad and Tobago to perform intercepting and emergency relief operations in the Caribbean region.

Capable of carrying a crew of 70, with additional accommodation for 50 troops or passengers, the vessel features a helicopter flight deck, 30mm and 25mm cannons and can cruise at a speed of 25knots when fully loaded.

The deal was originally signed in 2007 for the construction of three OPVs and supported by the UK Government, but was cancelled in September 2010 due to delays relating to delivery times. The second and third vessels are scheduled for delivery to the Brazilian Navy in December 2012 and 2013 respectively.