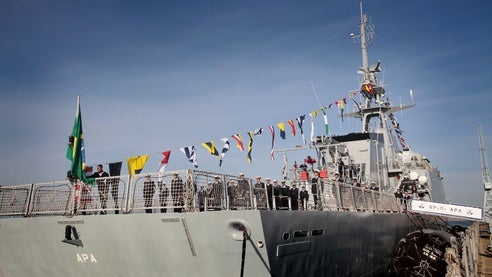 The Brazilian Navy has received the second of three ocean patrol vessels (OPVs), named Apa, from BAE Systems at Portsmouth Naval Base, US, in support of the navy’s Prosuper fleet modernisation programme to boost its maritime capabilities.

Delivery is part of the Brazilian Navy’s $186m deal with BAE to procure three 90m, 2,200t OPVs, originally built for the Trinidad and Tobago coastguard to perform intercepting and emergency relief operations in the Caribbean region.

The deal also includes an additional £13m for training and support by BAE with an option to locally build another five OPVs for the Brazilian Navy.

BAE Systems Maritime-Naval Ships business managing director Mick Ord said: "As we continue to build on our relationship with the Brazilian Navy, our team will now focus on supporting APA’s crew through a comprehensive training programme before she sets sail for Brazil in February."

“As we continue to build on our relationship with the Brazilian Navy, our team will now focus on supporting APA’s crew through a comprehensive training programme before she sets sail for Brazil in February."

Capable of carrying a crew of 80, with additional accommodation for 40 troops or passengers, the vessel features a helicopter flight deck, 30mm and 25mm cannons and can cruise at a speed of 25k when fully loaded.

Amazonas was delivered to the navy in June, while the third ship of the class, Araguari, is scheduled to be handed over in April 2013.

The ships will be used by the navy to conduct maritime security in its territorial waters, including the protection of the country’s oil and gas reserves.