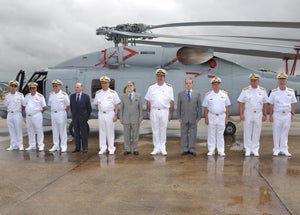 "We cannot neglect our wealth, including the Pre-Sal [off-shore] area," Amorim added.

The two Seahawk helicopters, designated MH-16 in Brazil, are equipped with a fuel system to offer five hours of continuous flight to conduct missions, an integrated communications suite, maritime surveillance radar and a thermal imaging system.

Capable of reaching speeds of more than 290km/h, the helicopter can be used to perform coastal and oceanic missions in addition to anti-submarine and anti-surface warfare, surveillance, and gunfire support and search-and-rescue operations.

As part of the US Foreign Military Sales programme, the navy will receive a total of six new Seahawk helicopters, of which four will be inducted into service by the end of 2012.

Delivery of all six S-70Bs will be completed in 2014 to replace the Navy’s SH-3A/B Sea King helicopters, which have been used by the Naval Aviation for more than 40 years and scheduled to retire by 2015.