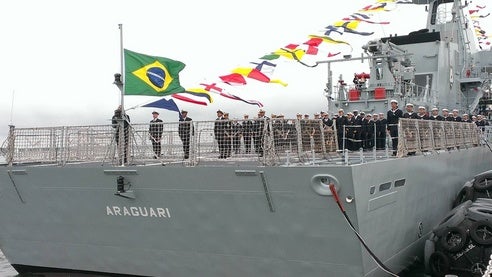 The Brazilian Navy’s third and final BAE Systems-built Amazonas-class ocean patrol vessel (OPV), Araguari, has set sail from the UK, on a journey to its home port in the north-eastern city of Natal, Brazil.

In preparation for the journey and the operations, Araguari’s crew of 80 have also completed the UK Royal Navy’s flag officer sea training, with support from the BAE team.

On its journey, the latest ship will undergo a diplomatic tour of Europe and Africa before making the 10,000 mile crossing to South America in September.

Earlier the navy had awarded a $186m contract to BAE for the purchase of three OPVs, originally built by BAE, for the coastguard of Trinidad and Tobago to perform intercepting and emergency relief operations in the Caribbean region.

US Navy denies China’s claims of warning off USS Benfold

"The ship will undergo a diplomatic tour of Europe and Africa before making the 10,000 mile crossing to South America in September."

BAE Systems Maritime commercial director Nigel Stewart said: "She performed incredibly well through sea trials so we are immensely proud to see her sailing with her first crew."

Capable of carrying a crew of 80, with additional accommodation for 40 troops or passengers, the vessel features a helicopter flight deck to support medium-sized helicopter operations, a 30mm cannon, 25mm guns and it can cruise at a speed of 25k when fully loaded.

In addition to conducting maritime security missions in Brazil’s territorial waters, such as protecting the country’s oil and gas platforms, the vessels can support humanitarian relief and search-and-rescue operations.

Amazonas (P120) and Apa (P121), the first and second OPV of the class respectively are currently operational while Araguari was handed over to Brazilian Navy in November 2012.