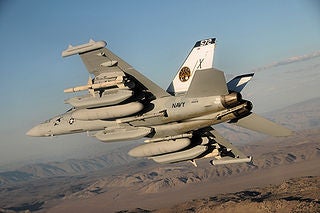 Boeing has awarded a contract to Northrop Grumman to produce an embedded global positioning/inertial navigation system (EGI) in support of the US Navy’s F/A-18E/F Super Hornet and EA-18G Growler aircraft.

Northrop, as one of two contractors selected, will develop a prototype EGI with fibre-optic gyro performance suitability for F/A-18 E/F and EA-18G joint precision approach and landing system (JPALS) requirements under the contract.

The company will also provide integration risk reduction services to meet specific system requirements, as well as increase performance towards a navigation subsystem that is JPALS-compatible.

"JPALS has been designed by the navy to replace radar-based systems and uses GPS data to provide accurate, reliable landing guidance for fixed and rotary-wing aircraft."

Boeing will select a single supplier for a five-year engineering and manufacturing development programme and to produce an estimated 500 EGIs, while the selected contractor will also provide inertial navigation systems for the entire fleet of Super Hornet and Growler aircraft.

JPALS has been designed by the navy to replace radar-based systems and uses global positioning system (GPS) data to provide accurate, reliable landing guidance for fixed and rotary-wing aircraft; in addition, it supports fixed-base, tactical and shipboard applications.

Gorik Hossepian, Northrop Grumman vice president of navigation and positioning systems, said: "Our proprietary fibre-optic gyro technology can be scaled for varying needs and applications, including the demands of a cutting-edge inertial navigation system for the Super Hornet and Growler aircraft."

A variant of the F/A-18F, the EA-18G Growler features an advanced AEA avionics to support the naval airborne electronic attack (AEA) mission.