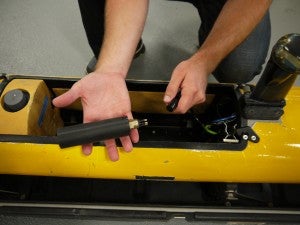 Bluefin Robotics and the Massachusetts Institute of Technology’s (MIT) Laboratory of Autonomous Marine Sensing Systems (LAMSS) have successfully demonstrated the MOOS-IvP payload autonomy concept, installed on a field exchangeable Gumstix computer, on the Charles River in Cambridge, Massachusetts, US.

Conducted on Bluefin-9 and Bluefin-21 autonomous underwater vehicles (AUV), the payload, also known as backseat driver, has demonstrated its capability.

From one set of topside equipment, the MOOS-IvP has served as unified communication, command and control infrastructure for managing multiple vehicles, under the payload autonomy operational paradigm.

"The plug-and-play autonomy capability will serve as a critical enabler for efficient field deployment of the payload autonomy operational paradigm."

The team initially connected the autonomy software payload to a laptop computer to test the mission configuration with a simulation environment, representing realistic platform dynamics and sensory input.

The autonomy software was then installed on the Bluefin-9 for low-cost field-testing and finally on to the Bluefin-21 operational platform.

"Thanks to Bluefin’s standard payload interface, we are able to experiment with new behaviours without posing a risk to the vehicle, at a reduced development time and cost." Schmidt said.

The project is funded by the US Office of Naval Research (ONR) while Bluefin Robotics and Battelle provided additional support.
The MOOS-IvP will also undergo further trials on the Bluefin-9 on the Charles River later this month.

MOOS-IvP development is sponsored by ONR Code 311, while the adaptive and collaborative environmental acoustic research is supported by ONR code 322OA.