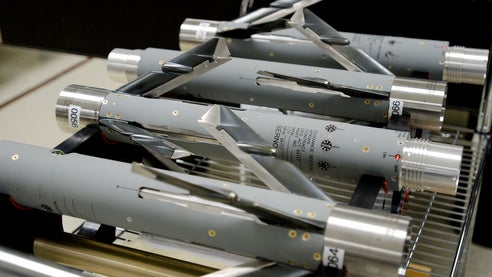 "This highly effective weapon allows aviators to complete their missions, while minimising the risk of harm to allies and non-combatants," Corey said.

According to BAE Systems precision guidance solutions director John Watkins, the APKWS technology was designed to bridge the gap between the Hellfire missile and unguided rockets and has proved successful in several combat situations since its deployment.

"Today, the weapon is doing its job providing our warfighters with a precise and reliable rapid-fire missile system, especially effective in the difficult terrain of Afghanistan," Watkins said.

“Today, the weapon is doing its job providing our warfighters with a precise and reliable rapid-fire missile system, especially effective in the difficult terrain of Afghanistan.”

In January, the APKWS demonstrated its capabilities on fixed-wing aircraft during flight tests and was transferred to Afghanistan in early March for deployment.

The guidance kit can change a standard unguided rocket into a laser-guided missile, which minimises collateral damage and is effective against lightly armoured targets.

Since 2007, the APKWS has been fired more than 100 times, with a 94% success rate off Bell-built AH-1W Super Cobra and UH-1Y Helos, as well as OH-58D Kiowa Warrior and light fixed-wing attack aircraft.

As a prime contractor for APKWS since 2008, BAE will deliver its 925th initial production system to the navy in September 2012 and will also be made available to the US allied forces through foreign military sales.