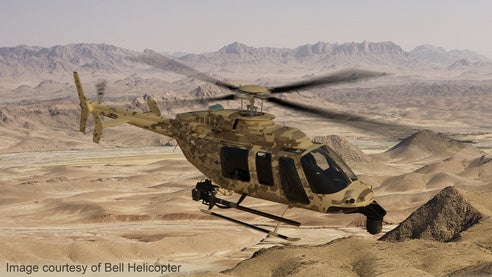 During the testing, seven APKWS rockets launched from a Bell 407GT helicopter successfully hit various targets, validating its safety and suitability on the new platform.

BAE Systems precision guidance solutions director David Harrold said that the accurate APKWS rockets have destroyed targets ranging from 1.5km to 5km away, at both direct and off-axis angles.

"The 407GT platform is significant because it is Bell Helicopter’s first commercially qualified, armed helicopter, configurable to perform a wide range of missions," Harrold added.

Bell Helicopter president and CEO John Garrison was quoted by Shephard as saying: "The GT is effectively taking the GX platform and making it capable for a universal weapons pod, light munitions, laser guided munitions, and we’re qualified for the APKWS, which is an incredible cost-effective weapons system."

"The 407GT platform is significant because it is Bell Helicopter’s first commercially qualified, armed helicopter, configurable to perform a wide range of missions."

APKWS is a semi-active laser guided 2.75in version of the existing Hydra 70 unguided rocket system and consists of BAE-built mid-body guidance unit (WGU-59/B).

The weapon system also validated its ability to strike against stationary and moving targets from Bell AH-1W Super Cobra, UH-1Y Helos helicopters and a Beechcraft AT-6 light attack/trainer aircraft.

Further qualification testing of APKWS system is likely to take place on several other rotary and fixed-wing aircraft in future.