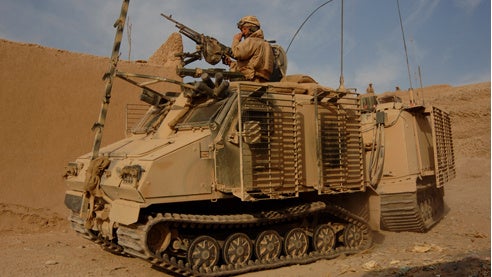 The UK Ministry of Defence (MoD) has awarded a contract to BAE Systems to modernise the Royal Marines’ fleet of BvS10 Viking all-terrain vehicles.

Under the contract, BAE will overhaul 99 vehicles and convert all of them to a common Mk2 mine-protected amphibious standard.

UK defence equipment, support and technology minister Philip Dunne said: "The £37m midlife upgrade to the Viking fleet of amphibious vehicles will keep these highly capable vehicles in service with the Royal Marines into the 2030s."

"With a balanced defence budget for the first time in a generation, we are able to deliver with confidence the equipment our Armed Forces require."

"The £37m midlife upgrade to the Viking fleet of amphibious vehicles will keep these highly capable vehicles in service with the Royal Marines into the 2030s."

Royal Marines major general Ed Davis said: "Viking is an essential asset for the Royal Marines in conducting short-notice crisis response operations around the world and any modification which enhances operational effectiveness and makes life that bit safer for our personnel is always welcomed."

Of the 99 Viking vehicles, BAE will integrate top-mounted guns on 19 vehicles to convert them into a new crew-served weapon variant, while nine others will be revamped to provide 81mm mortar firing capabilities.

The refurbished Vikings fleet will feature a new mine-protected V-shaped underbody to enable crew protection in the vehicle, as well as improvements to braking and suspension systems.

The twin-car BvS10 armoured all-terrain vehicle is also used be forces in Sweden, France and the Netherlands.

Work will be carried out at the company’s facility in Örnsköldsvik, Sweden, and is scheduled to be complete by the end of 2014.