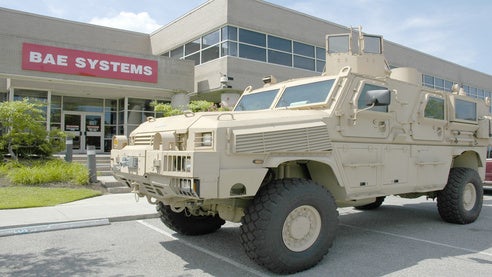 The US Navy has awarded a contract to BAE systems to perform a range of communications and electronics services on a variety of military vehicles that include mine resistant ambush protected (MRAP) vehicles.

Under the $698m multiple-award contract, the company will provide support services that include designing and engineering, prototyping and testing, and systems and software integration services prior to the installation of the networks.

The services will be provided to support the Navy’s Space and Naval Warfare Systems Center (SCC) Atlantic in order to ensure the vehicles’ communications and electronics networks used by the Navy, the US Marine Corps and other joint forces remain effective.

The contract also involves BAE bidding for a series of task orders against one other prime contractor for the next five years, if all options are exercised.

Additionally, the company will assist in maintaining the networks and other equipment even after the vehicles enter into service with the forces.

Work under the contract will be primarily carried out at the company’s facility in North Charleston, South Carolina, US.

A wide range of Mine-resistant ambush protected (MRAP) vehicles are mostly used by the Marine Corps to support the Operation Enduring Freedom (OEF) in Afghanistan and Iraq.