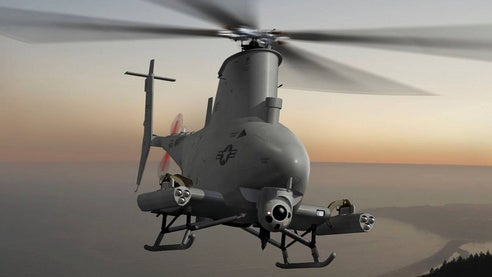 BAE Systems has been awarded a contract by the US Navy to integrate the advanced precision kill weapon system (APKWS) on Northrop Grumman’s MQ-8B Fire Scout unmanned aerial vehicle (UAV).

Integration of the weapon system on the UAV will enhance the navy’s ability to conduct various missions aboard surface ship platforms and in hostile environments.

Under the urgent operational requirement contract, BAE will conduct system analyses and modelling based on its high fidelity, integrated flight simulator for the navy, prior to accelerating integration of APKWS onto the UAV.

BAE Systems APKWS programme manager Roy Rumbaugh said that the rapid integration of APKWS would enable the Fire Scout to engage targets on land or at sea with laser-guided accuracy, while safeguarding troops from threats.

"This expansion onto unmanned aircraft is the next exciting step after demonstrating performance on both rotary and fixed-wing manned aircraft," Rumbaugh added.

"This expansion onto unmanned aircraft is the next exciting step after demonstrating performance on both rotary and fixed-wing manned aircraft."

APKWS is a semi-active laser guided 2.75in version of the existing Hydra 70 unguided rocket system and consists of BAE-built mid-body guidance unit (WGU-59/B).

The weapon system has validated its ability to strike against stationary and moving targets from Bell AH-1W Super Cobra and UH-1Y Helos helicopters during the recent initial operational test and evaluation phase.

BAE has developed and delivered the APKWS rocket in partnership with the Direct and Time Sensitive Strike Program Office at the US Naval Air Systems Command.

Deployed onboard Bell-built AH-1W Super Cobra and UH-1Y Helos, as well as OH-58D Kiowa Warrior and light fixed-wing attack aircraft, the APKWS has been fired more than 100 times, with a 94% success rate since 2007.

Capable of providing the lowest collateral damage for precision engagement, the system will enable the military engage with enemy targets with improved flexibility.