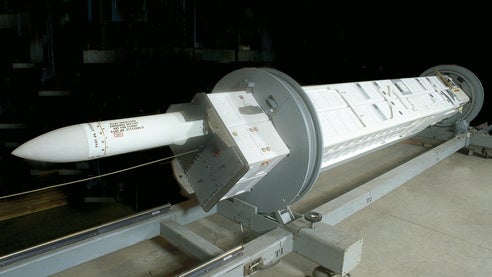 The US Navy has awarded a modification contract to BAE Systems to provide additional ship sets of the Mk 41 vertical launching system (VLS) for installation on the Arleigh Burke DDG-116 destroyer and the Aegis Ashore equipment.

The latest $22.9m contract is a modification to the originally awarded contract for the Mk 41 VLS mechanical components in June 2011.

BAE Systems’ Weapons Systems business vice president and general manager Mark Signorelli said the firm will continue its support for the US Navy by providing the Mk 41 VLS for the DDG-51 programme.

"The Mk 41 VLS provides a number of key capabilities that support a wide range of missions onboard the Navy’s major combatants," Signorelli added.

The Aegis Ashore part of the contract will support the US Phased, Adaptive Approach for missile defence in Europe.

The additional ship set, which includes hardware components and a land-based Mk 41 VLS equipped with SM-3 missiles as part of the Aegis Ballistic Missile Defence system, will be used to support the first tactical Aegis Ashore site in Europe.

Work under the contract will be carried out at several BAE Systems and subcontractor facilities in South Carolina, New York, Kentucky, Minnesota, Pennsylvania, South Dakota and North Dakota, US.

The majority of the work under the contract will begin from 2013 and run through 2015.

With more than 30 years of experience in the development, production, and support of the system for naval forces throughout the globe, BAE Systems has been the mechanical design agent for the US Navy’s Mk 41 VLS.

Image: The Mk 41 VLS supports a wide range of missions onboard the US Navy’s major combatants. Photo: BAE Systems.