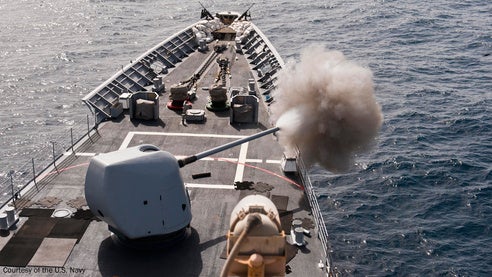 The US Navy has awarded a $25.7m contract to BAE Systems to modify and reconfigure two Mk 45 Mod 2 naval guns, in a bid to significantly enhance their overall mission performance.

Under the contract, the company will perform modifications on the guns to upgrade them to the 5in 62-calibre Mk 45 Mod 4 configuration, following which the gun systems will be fitted on new Arleigh Burke-class (DDG 51) destroyers.

"The Mk 45 Mod 4 gun systems cost-effectively improve the accuracy and reliability sailors need to successfully support the Navy’s broad spectrum of missions for its major combatants."

With more than 40 years of experience in designing and producing Mk 45 gun systems, BAE has provided the US Navy and nine international fleets with over 250 shipboard applications, to date.

Work on the contracts will be carried out at the company’s facilities in Louisville, Kentucky and Minneapolis, Minnesota, US, while deliveries are scheduled to take place in 2014.

Image: An Mk 45 Mod 4 firing a round aboard a naval vessel. Photo: courtesy of BAE Systems.