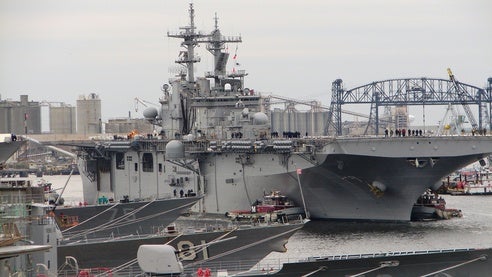 The contract includes planning and execution of depot-level maintenance, alterations and modifications that will update and enhance the military and technical capabilities for the aircraft carrier.

Capable of accommodating a crew of 1,292, the 844ft-long USS Wasp has been designed to support missions such as emergency communications assistance, air traffic control and carrying aircraft and equipment.

"The USS Wasp was the navy’s vessel of choice in responding to Hurricane Irene in 2011, as well as Super Storm Sandy in 2012."

Accommodating aircraft and amphibious vehicles, the USS Wasp was the navy’s vessel of choice in responding to Hurricane Irene in 2011, as well as Super Storm Sandy in 2012.

Scheduled to be completed by May 2014, work under the contract will be carried out in Norfolk, Virginia, US.

The USS Wasp is also being used by the US Navy as the test platform for the Lockheed Martin-built F-35 Lightning II joint strike fighters (JSF).