BAE to develop naval canisters for US Navy
Menu 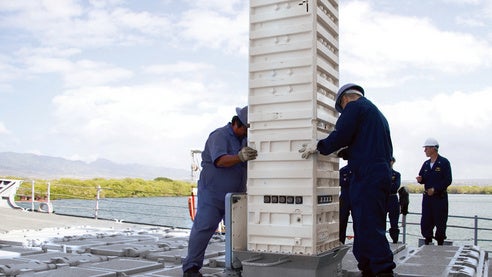 BAE Systems has been awarded a contract by the US Navy to develop canisters capable of storing, transporting and launching a wide range of missiles.

In addition, BAE will provide ancillary hardware and associated support equipment, as part of the contract, which also has options for additional annual contract awards.

If all options are exercised, the contract will have a period of performance from 2013 through to 2019 and is expected to be valued at $400m, while Naval Sea Systems Command Washington will serve as the contracting activity.

Scheduled to be complete by July 2015, work under the contract will be carried out in South Dakota and Minneapolis, Minnesota.

Designed to serve as missile shipping and storage containers, the canisters will be used as a launch platform for specific missiles and provide rocket motor exhaust gas containment and launch rail during missile firing.

Image: BAE-built canister being installed onboard a battleship. Photo: courtesy of BAE Systems.