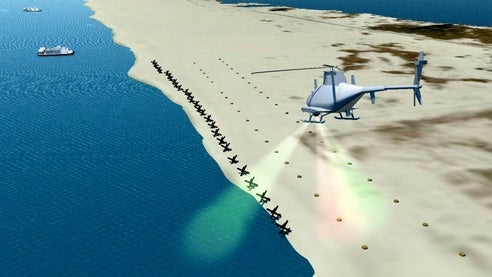 The US Department of Defense (DoD) has awarded a contract to BAE Systems to develop an advanced prototype system, which will support the US Navy and Marine Corps in detecting mines and obstacles in near-shore waters.

Under the $20m contract, awarded as part of the coastal battlefield reconnaissance and analysis (COBRA) programme, the company will build a laser-based airborne system to provide round-the clock capabilities to ensure safe transition of sailors and marines from ship-to-shore.

"Having conducted extensive research and development in advanced sensors, airborne prototype systems, and sophisticated real time software, BAE Systems has worked closely with the Office of Naval Research (ONR) to mature the technologies and capabilities to meet the navy's mine countermeasures needs on an accelerated timeline," Noguchi said.

“This law helps to reduce acquisition costs and also accelerates delivery of technology to the fleet to protect our sailors and marines from this prolific threat."

"This law helps to reduce acquisition costs and also accelerates delivery of technology to the fleet to protect our sailors and marines from this prolific threat," Almquist added.

BAE will use its borderless approach to support key resources in design, integration, and testing for the COBRA programme.

Work under the contract will be carried out at the company's facilities in Hawaii, New York, Massachusetts and New Hampshire, US.

Image: An illustration of how BAE's advanced laser-based prototype system will protect troops in the near-shore waters. Photo: courtesy of BAE Systems.