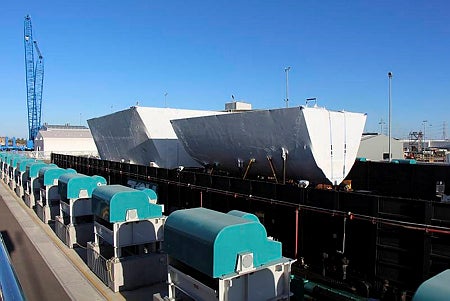 The delivery forms part of a $8bn contract awarded to ASC Alliance for construction of three AWDs, HMAS Hobart, HMAS Brisbane and HMAS Sydney, for RAN.

The two blocks, 415 and 111, have undergone inspections at the Williamstown shipyard, Australia, prior to their delivery.

Clare said that the two blocks would be merged to equip the 48 cell MK 41 vertical launch system (VLS), while forming part of the front third of the HMS Brisbane vessel.

"The VLS can store and then fire SM-2 or Evolved Sea Sparrow missiles in quick succession and is an important element of the combat system that will be installed into the Hobart Class destroyers," Clare said.

The AWD programme, also known as SEA 4000, involves construction and fabrication of 11 blocks by BAE, including seven blocks for the first destroyer and two for the second frigate.

"The VLS can store and then fire SM-2 or Evolved Sea Sparrow missiles in quick succession and is an important element of the combat system that will be installed into the Hobart Class destroyers."

HMAS Hobart is scheduled to be delivered to RAN in early 2016, while HMAS Brisbane is likely to start consolidation in early 2014.

Construction on the third ship of the class, HMAS Sydney, is currently under the block fabrication stage.

Based on the Navantia-designed F100 frigate, the AWD ships will provide air defence for vessels, land-based forces and infrastructure in coastal lines, in addition to anti-submarine warfare (ASW) operations.