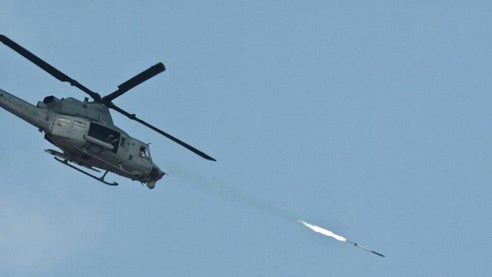 The Advanced Precision Kill Weapon System (APKWS), developed by BAE Systems, has been deployed in Afghanistan following approval by the US Marine Corps (USMC).

PMA-242 programme manager captain Brian Corey said the deployment was the culmination of years of rigorous testing to bring the important capability to the field.

"APKWS allows our warfighters to accurately engage targets in urban terrain where the threat of non-combatant casualties and collateral damage has prevented us from doing so in the past," Corey added.

The APKWS had successfully demonstrated its capabilities on fixed-wing aircraft during flight tests conducted at Eglin Air Force Base in Florida, US in January 2012 and was transferred to Afghanistan in early March 2012 for deployment.

The guidance kit can change a standard unguided rocket into a laser-guided missile that minimises collateral damage and is effective against lightly armoured targets.

The APKWS has been fired over 100 times since 2007 with a 94% success rate off Bell-built AH-1W Super Cobra and UH-1Y Helos as well as Army OH-58D Kiowa Warrior and light fixed-wing attack aircraft.

BAE Systems Precision Guidance Solutions director John Watkins said: "The APKWS has proven its maturity, and soon it will be available to all U.S. military forces and select countries."

BAE Systems has served as the prime contractor for the APKWS since 2008 and has delivered 400 production systems to the Navy.

Image: APKWS being fired from a fixed-wing aircraft during flight tests conducted at Eglin Air Force Base in Florida, US in January 2012. Photo: BAE Systems.