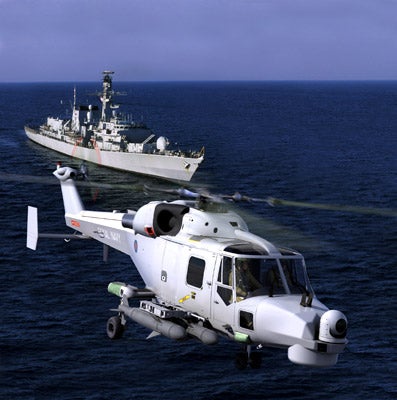 The AgustaWestland-built Wildcat aircraft has undergone ‘Ship Helicopter Operating Limits’ trials to help define its operating limits when carrying payloads and weights in all weather conditions.

During the trials, the Wildcat validated its mission systems, night-vision cockpit and navigation systems, making it ideal for front line duties.

The aircraft operated in day and night with various payloads and landed nearly 400 times on the frigate’s flight deck while the ship sailed off the coasts of southern England and northern Scotland.

The aircraft will undergo further trials, including tests of radar, electro-optics and navigational kit, as well as missile firings.

The helicopter has also completed ‘hot and high’ trials in Colorado, US, and has flown at sea on and off the auxiliary vessel RFA Argus.

Powered by two new-generation CTS800 engines, the 6t helicopter is an improved version of its predecessor, the Westland Super Lynx, and has been upgraded with a robust airframe construction, fully integrated avionics, and a glass cockpit.

Capable of deploying from smaller vessels, the Wildcat is designed to conduct missions ranging from anti-submarine warfare, reconnaissance, transport of troops and equipment, to force protection and amphibious operations support.

Under a contract signed by the UK Ministry of Defence (MoD) with AgustaWestland in 2006, the navy aviation arm will receive 28 Wildcats to perform various maritime attack missions, while 34 aircraft will be provided to the British Army.

The first naval version of the Wildcat helicopter is scheduled to be operational in 2015, while the army variant will begin operations in 2014.