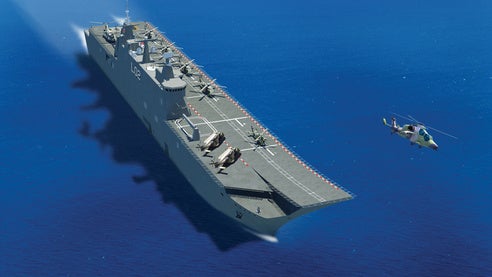 "The LHDs are the largest ships ever built for the Royal Australian Navy and will provide the Australian Defence Force with one of the most capable and sophisticated amphibious ships in the world," Clare said.

BAE Systems maritime director Bill Saltzer said that preparation works were completed and the Australian team would begin next phase of the LHD construction programme following the hull’s arrival, expected in a few weeks.

"We will need to wait for exactly the right conditions before we proceed to ensure that the operation is done in a safe and controlled manner," Saltzer said.

"The LHDs are the largest ships ever built for the Royal Australian Navy and will provide the Australian Defence Force with one of the most capable and sophisticated amphibious ships in the world."

As part of ADF’s broader amphibious deployment and sustainment system, RAN had awarded a contract to BAE Systems for construction of the two amphibious ships.

The vessel’s four sections are currently at different stages of construction, outfitting and consolidation, including mast modules fabrication, at the Williamstown yard in Western Australia.

"BAE is Australia’s largest defence contractor and will play a key role in the consolidation and fitout of the LHD once it arrives," Clare added.

The LHD is expected to enter service with RAN in 2014, while HMAS Adelaide, the second ship is scheduled to be commissioned in June 2015.

It will be used to transport military equipment and aviation units as well as support humanitarian missions for RAN.

Image: The LHD is being built for the Royal Australian Navy. Photo: courtesy of BAE Systems.