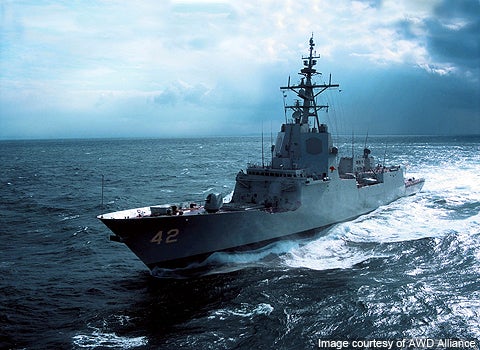 Delivery follows a previously awarded $3.25m subcontract to MG Engineering to manufacture three 25t masts over a two-year period in support of the RAN’s AWD programme.

Prior to being consolidated onto HMAS Hobart, the mast will undergo necessary changes by the alliance at the South Australian Government’s Common User Facility at Techport Australia.

The five-storey mast will be integrated with significant elements of the Aegis weapon system, as well as a navigation radar and the SPQ-9B, or Spook horizon-search radar.

"The equipment incorporated into the mast structure will enable the destroyers to search and track targets immediately above the sea surface, such as low-flying aircraft, unmanned aerial vehicles and missiles," Kelly said.

"The equipment incorporated into the mast structure will enable the destroyers to search and track targets immediately above the sea surface, such as low-flying aircraft, unmanned aerial vehicles and missiles."

Based on the Navantia-designed F100 frigate, the AWD ships will provide air defence for vessels, land-based forces and infrastructure in coastal lines and conduct anti-submarine warfare (ASW) operations.

The second Hobart-class destroyer, HMAS Brisbane is likely to start consolidation in early 2014, while the third ship of the class, HMAS Sydney is currently under construction.