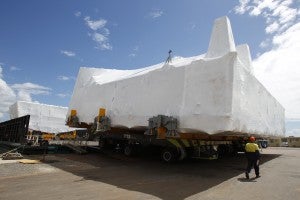 AWD Alliance CEO Rod Equid said that the delivery marks a significant milestone in the AWD project, with the one of the blocks will be integrated with the ship’s ammunition and 5in naval gun.

Delivery follows a previously awarded subcontract to Forgacs Engineering to manufacture four blocks in support of the RAN’s AWD programme.

The forward-most block will hold the anchor, chain and winch machinery, while the remaining blocks will be fitted with the helicopter hangar and rudder controls and will be positioned at the aft of the ship, Equid added.

"The forward-most block will hold the anchor, chain and winch machinery."

Based on the Navantia-designed F100 vessel, the AWD ships will provide air defence for vessels, land-based forces and infrastructure in coastal lines and conduct anti-submarine warfare (ASW) operations.

The second Hobart-class destroyer, HMAS Brisbane is likely to start consolidation in early 2014, while the third ship of the class, HMAS Sydney, is currently under construction.

The ships are being integrated at the South Australian Government’s Common User facility at Techport, Australia.