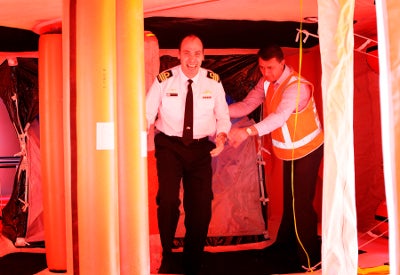 Under the supervision of the Defence Materiel Organisation, Royal Australian Navy (RAN) and BAE Systems Australia, the 4000m² warehouse was transformed into the new $5m training facility in six months.

The new facility is equipped with simulated training suites, LHD ship-fitted equipment, classrooms, a common room and a fitted-out office area for the instructors and Australian Defence Force (ADF) personnel who will work from the centre.

"This facility will train over 700 ADF personnel to safely operate and maintain the LHDs in anticipation of acceptance by navy of Australia’s first LHD NUSHIP Canberra in early 2014 and the acceptance of NUSHIP Adelaide the following year," Kelly said.

BAE Systems Maritime director Bill Saltzer said that the facility would be the most advanced training facilities currently available in Australia and provide a virtual LHD, enabling the crew to understand the navy’s future warships.

“The equipment installed has the ability to replicate any scenario, incident or event the LHDs may encounter."

"The equipment installed has the ability to replicate any scenario, incident or event the LHDs may encounter, which means the crews that will be trained here will be familiar with all the ship’s capability and systems before they even step on board," Saltzer added.

Featuring a marine evacuation system to train the crews in emergency evacuation procedures, the facility also provides follow-on and through-life support training, in addition to managing and conducting future training needs for the ADF.

The RAN will use the two 27,000t LHD ships, HMAS Canberra and HMAS Adelaide, to support humanitarian missions and transport military equipment and aviation units.