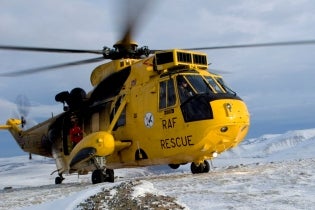 The UK Ministry of Defence (MoD) has awarded a contract to AgustaWestland for the provision of Sea King integrated operational support (SKIOS).

The contract is the extension and final phase of the previously awarded SKIOS contract to the company in 2005, scheduled to be complete in March 2013.

Under the recent £258m contract, the company will provide continued technical and maintenance support for the Sea King helicopter fleet of 90 until their retirement from service in March 2016.

The company will also provide a comprehensive availability based support package, as well as depth maintenance, second line workshop services and spares for the helicopters.

UK Defence Equipment Support and Technology minister Philip Dunne said that for more than 40 years, the Sea King helicopters have been providing a vital role in air-sea rescue and surveillance.

"Securing this contract ensures value for money for the taxpayer while maintaining the provision of search-and-rescue helicopters around the UK, 24 hours a day throughout the year."

Defence Equipment and Support Sea King team leader Royal Navy captain Tony Gray added: "Securing this contract ensures value for money for the taxpayer while maintaining the provision of search-and-rescue helicopters around the UK, 24 hours a day throughout the year."

Selex ES is one of the partners that will support AgustaWestland with avionics support services on the latest SKIOS contract.

AgustaWestland-built Sea King helicopters are also in service with navies of Australia, Egypt, Germany, India and Pakistan, as well as air forces of Belgium, Egypt, Norway and Qatar.