The vessel will lead the international task group to the Norwegian-led winter exercise, Cold Response. It will serve as a command ship for Nato for the first time.

It is also the first time that a QEC ship has operated in the Arctic.

HMS Prince of Wales, along with aircraft and land forces, including Royal Marine Commandos, will demonstrate how Norway and Europe’s northern flank can be protected by a unified multilateral force against emerging threats. 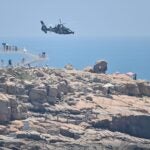 The Nato exercise inside the Arctic Circle will see the participation of 35,000 troops from 28 nations.

The exercise aims to train the soldiers to work together in extreme cold weather conditions.

This year, the Cold Response exercise will test their capabilities across sea, air and land domains.

Throughout its deployment, the carrier will be surrounded by aircraft, warships, a nuclear-powered attack submarine and a replenishment vessel.

A team of Royal Navy’s senior sea-going staff, Commander UK Strike Force, will be aboard the vessel. The strike force will be headed by rear admiral Mike Utley.

Utley said: “Nato is the cornerstone of the UK defence and our commitment to the alliance is absolute.

“It is a privilege to be the UK Maritime Component Commander as we participate in this Norwegian-led exercise.”