The contract was awarded by the Mine Hunting Capability (MHC) team of the UK Ministry of Defence’s (MoD) procurement arm, Defence Equipment and Support (DE&S).

Under the contract, AEUK will deliver three MHC autonomous underwater vessel (AUV) systems that consist of  total of nine vehicles.

The company will also provide a detailed training and support package for a period of three years from the time of delivery. 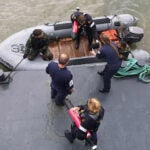 The first AUV equipment is expected to be delivered by next year.

UK MoD Defence Procurement Minister Jeremy Quin said: “This innovative technology is a huge leap forward for the Royal Navy and will be crucial to protecting the security and safety of our personnel.

“Supporting wider British industry, it also reinforces our focus on ensuring the UK remains at the forefront of tackling defence threats.”

The contract is expected to generate over 70 jobs, including 50 at the company in Dorset and 23 across Europe.

According to the DE&S, the new systems will allow RN’s ships and submarines to maintain the freedom of movement while conducting security operations at the sea.

The AUV systems will also allow the service to search, detect and neutralise mines from a distance or remotely.

UK DE&S CEO Sir Simon Bollom said: “The threat posed by sea mines is constantly evolving and DE&S are working with industry to ensure the Royal Navy has a world-class network of capabilities to protect the UK’s maritime interests as well as improving the safety of Royal Navy personnel.”

Earlier in 2021, the company received a contract to provide first uncrewed minesweeper to the Royal Navy.