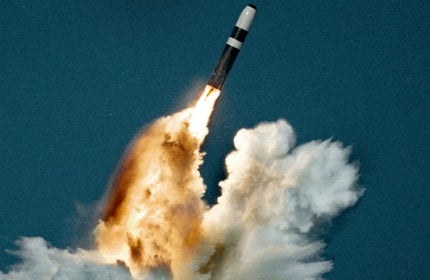 Leader of the Scottish National Party (SNP) Alex Salmond has said if his party won, it would make nuclear weapons illegal, meaning the Trident carrying submarines would need to find a new base in the UK, or even in France or the US. There would also be no capacity for other Nato nuclear submarines to dock there for maintenance.

With time running short to make preparations for alternatives, the House of Lords Economic Affairs Committee met earlier in the year to take evidence from defence expert Francis Tusa to explore the issues and potential solutions.

Chaired by Lord Tugendhat, the committee heard that 20,000 civilian and military personnel are directly employed in defence roles in Scotland, with 6,000 at Faslane alone, making it one of the country’s biggest employers. The effects on the community of the loss of a military site have already been observed with the mothballing of a number of RAF air bases north of the border in areas that offer few other alternative employment opportunities.

Where now for Trident?

"A separate issue that would affect any future policy is whether there would be a Trident replacement, due in 2028."

Any yes vote for independence would be followed by a Scottish general election. If the election was won by the SNP, any submarines not in dock would potentially return to Devonport in Plymouth, which is where the submarines are maintained, but it has not been used as a naval base since operations moved to the Clyde. It is still suitable for use as it is dredged to submarine depth and has nuclear safety regulations in place. Devonport has in the past hosted nuclear submarines, and there is local support for the jobs they would bring if they returned. More controversially, it has been proposed that British submarines could berth at Brest in France, or even at US ports.

As regards housing the warheads, many are already kept at Aldermaston and Berkley. Post Cold War, an arsenal of only 200 is required to be kept. Alternatively the current storage and loading facility for Trident nuclear warheads, Coulport, in Argyll, is a floating dock which could be relocated if required.

A separate issue that would affect any future policy is whether there would be a Trident replacement, due in 2028. There has been a significant investment in design work, but the decision gate is not until 2016 and the Liberal Democrat half of the coalition government is against a like-for-like replacement, promoting a study into alternatives instead. The infrastructure to support a replacement alone could cost as much as £3bn, excluding facilities for warhead storage and maintenance. Built from scratch, delivering an alternative and supporting infrastructure could take up to seven years.

Outside of political wrangling, the issue of maintaining the Trident deterrent remains contentious in the public consciousness. Just this week 250 activists gathered outside Faslane naval base as part of action calling for plans to renew Trident to be scrapped. Several chained themselves to railings and 47 individuals were arrested.

The defence budget of an independent Scotland would be similar to that of the "arc of prosperity" of small, independent states, including Denmark, Norway, Ireland and Iceland – although the last two are no longer quite as prosperous as they once were. Based on a percentage of GDP this could be between GBP 1.75 and 2.7 billion – insufficient for Scotland to maintain the same level of assets and personnel as now, but enough to set up a Scottish Defence Force along a similar model to those countries. Tusa foresees an amount of horse-trading with the Ministry of Defence (MOD) concerning which military gets what assets, depending on their specific needs, especially concerning larger unique pieces of equipment such as the Queen Elizabeth-Class aircraft carriers.

"Outside of political wrangling, the issue of maintaining the Trident deterrent remains contentious in the public consciousness."

Military personnel may be asked whether they would prefer to join a Scottish Defence Force or remain with the British Armed Forces. The SNP has vowed to reinstate all Scottish regiments and bases axed in recent defence cuts, but the available budget may preclude this. However, the uncomfortable scenario of the Scots Guards ending up a British regiment rather than a Scottish one may result.

Scotland would not inherit membership to Nato and would have to apply in its own right, agreeing to the organisation’s policy of interoperability and communications. There was previously a policy of members having to accept nuclear submarines in their ports, which may hamper membership negotiations.

However, First Minister Alex Salmond said he was "certain" that Nato members would accept an independent Scotland despite the SNP’s non-nuclear stance, and that membership could be negotiated in the period between a "yes" vote and Scotland actually becoming independent.

"Personnel may be asked whether they would prefer to join a Scottish Defence Force or remain with the British Armed Forces."

As the vote draws close, the impact of Scottish independence on defence is being thrown to the political foreground, with Tory peers warning Prime Minister David Cameron that the issue is likely to feature in Question Time.

The Lords Economic Affairs Committee, chaired issued a report criticising the MoD’s refusal to address the significant financial and strategic defence impact of a yes vote, and the resulting disruption should the Trident base need to be moved.

"It’s obviously an absolutely vital issue for the whole of the UK, apart from the employment implications for Scotland," the Guardian reported committee chair Lord MacGregor as saying. "We hope the MoD is doing all its contingency planning, but we think it should be more open about the security questions."

Scottish independence is far from a done deal, but its potential impact on defence, nuclear deterrence and the local and national military and defence economy needs to be addressed now while there is still time to prepare.

Naval capabilities on the Korean Peninsula

Antagonistic rhetoric from North Korea has plunged relations on the Korean Peninsula to new depths in recent weeks.