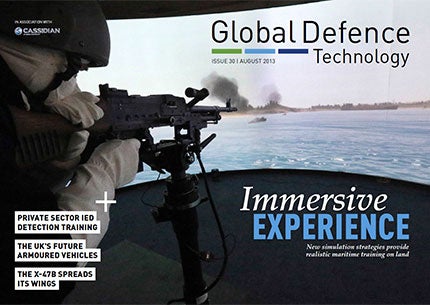 Despite technological advances in detection, improvised explosive devices continue to be the sharpest thorn in the side of alliance forces operating in Iraq and Afghanistan. We take a look into the future of counter-IED training.

We also profile the latest version of the AH-64 Apache attack helicopter, take a look at the US Navy’s X-47B unmanned combat air system demonstrator and review the latest milestones in the development of the A400M for the French Air Force.

Outsourced Education
Despite a recorded rise in IED incidents, deaths of coalition forces continue to fall, in part due to superior private sector training. GDT finds out if this could increase outsourcing in the UK.
Click here to read the full article.

Army
Battlefield Guardian
Boeing’s AH-64 Apache four-blade, twin engine helicopter has been providing air support for the US Army since 1986. We learn about its capabilities following four major upgrades.
Click here to read the full article.

Drive the Future
This year’s Defence Vehicle Dynamics show was the first to be run jointly by the MOD’s Defence Equipment and Support Organisation and Army HQ. GDT investigates the implications.
Click here to read the full article.

Airforce
Finally on the Runway
Despite a series of setbacks and controversies, Airbus’ A400M finally sees deliveries and operational certification ahead. We look at whether the airlifter is delivering on its initial premise.
Click here to read the full article.

Navy
X-47B Spreads its Wings
Testing of the X-47B unmanned combat air system demonstrator (UCAS-D) for the US Navy has continued apace. GDT finds out more about the latest milestone.
Click here to read the full article.

At-Sea Simulation
Tasked with saving the lives of other crew, gunners require supreme maritime marksmanship honed by hours of training. We look at NSC’s at-sea simulation strategy and its immersive approach.
Click here to read the full article.

Making Waves
DCNS has released footage of its first FREMM frigate Aquitaine arriving in New York ahead of a visit to Canada. We look at how the vessel has piqued interest.
Click here to read the full article.

The US Army is pursuing an ambitious equipment modernisation plan for 2014. We ask how it will balance the challenge of supporting troops in Afghanistan with uncertain future theatres, while the threat of sequestration looms.

As the international spotlight falls on lethal autonomous robotics, we investigate the concerns being raised about the use of "killer robots" in war zones. We also take a look at a system designed by ThaleRaytheonSystems to protect radar systems against potential cyber attacks, and review the latest technology unveiled at this year’s Paris Airshow.