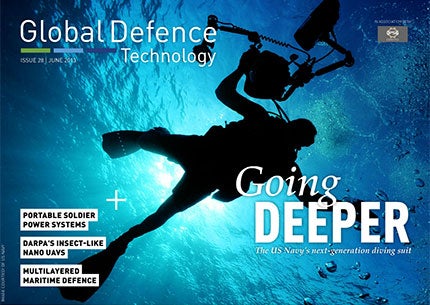 Since the break-up of the Soviet Union, the UK has played a critical role in nuclear disarmament and non-proliferation. We find out why it makes sense to maintain this role even in times of defence spending cuts back home.

We also look behind the Australian military’s plan to focus more strongly on protecting the country’s mineral resources, ask why investment in portable power systems for soldiers is declining despite recent breakthroughs, and check out DARPA’s programme to develop insect-sized UAVs.

Moreover, we explore the US Navy’s research into swimmable diving suits that can go to unprecedented depths, and take a look at Raytheon’s vision for multilayered maritime defence.

In this issue:
Special report
Slow and Steady
In the years since the breakup of the Soviet Union, the UK has played a critical role in nuclear disarmament and non-proliferation. Global Defence Technology asks why it should maintain this role in times of defence spending cuts back home.
Click here to read the full article.

Defending Down Under
A recently leaked white paper suggests the Australian military intends to focus more strongly on protecting the country’s AUD380 billion oil, mining and gas industry. We find out what threats triggered these new plans.
Click here to read the full article.

Army
Assault on Batteries
Alternative power solutions for dismounted soldiers have been a key focus of defence procurement for years, but with investment in portable power innovations waning, we find out if soldiers will be burdened with even more batteries.

Airforce
Small Eyes in the Sky
Floating like a butterfly and able to sting like a bee, proposals for DARPA’s insect-sized UAVs capable of tracking high-profile targets in densely populated areas finally seem to be taking off.
Click here to read the full article.

Navy
Grace under Pressure
The US Navy wants its divers to operate at unprecedented depths without resorting to decompression procedures. We explore the challenges of developing a lightweight, swimmable diving suit that works safely at depth.
Click here to read the full article.

Multilayered maritime defence
Navies worldwide are responding to the threat of piracy by investing in fleets of offshore patrol vessels aircraft and unmanned aerial systems. Global Defence Technology explore Raytheon’s vision of how these assets could be used together to boost security.
Click here to read the full article.

As digital systems increasingly control real-world assets, cyber-defence is now a vital element of national security. In the next issue we talk about critical infrastructure protection with Israel-based Waterfall Security Solutions.

We also investigate the military capabilities on the Korean Peninsula and the measures put in place to counter potential attacks from North Korea. Moreover, we ask if the RAF’s Storm Shadow missile is proof that multinational co-operation on arms procurement can weather the shortages hewn by dwindling budgets.

Plus, we ask BAE Systems why its radar system developed for the Royal Navy’s Type 23 frigates could be the most sophisticated radar system ever built.