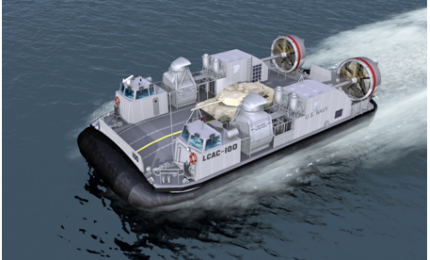 The company is known for its high-performance, high-quality military and commercial specialty marine craft for customers that require unique operational capabilities.

Innovative marine products for the US Navy, Army, Marine Corps, and Coast Guard

The US Navy, Army, Marine Corps and Coast Guard, along with maritime customers across the globe, have relied on Textron Systems for nearly half a century to provide rugged, innovative marine products to support their most demanding missions.

The Landing Craft Air Cushion (LCAC) is a proven high-speed, over-the-beach, fully amphibious landing craft capable of carrying up to 75t of payload at speeds of more than 40 knots.
The Ship-to-Shore Connector (SSC) is replacing the LCAC, providing a modernised means to land at more than 80% of the world's shorelines for the next 30 years.
The 47ft Motor Lifeboat (MLB) is a rugged, highly survivable, all-aluminium rescue boat that significantly enhances the ability to perform search-and-rescue operations in heavy weather conditions.
The autonomously/remotely operated fleet-class Common Unmanned Surface Vessel (CUSV) offers unparalleled flexibility for global multi-mission operations, and uses AAI’s field-proven command-and-control system.

With products ranging from air cushion marine craft, including the landing craft air cushion (LCAC), to specialty boats, such as the all-aluminium hull of the motor lifeboat, the firm’s winning technology is leading the way in revolutionary marine design.

The expeditionary LCAC has proven itself for more than two decades in versatile amphibious operations where coastal terrain limits access by traditional means.

The LCAC has successfully participated in worldwide relief efforts, including the 2004 tsunami, 2005 US Gulf Coast hurricanes, and most recently, the 2010 Haitian earthquake and 2011 Japanese earthquake.

Now, Textron Systems, together with the US Navy and its team partners, is leading the way as the LCAC evolves into the new ship-to-shore connector.

Ship-to-Shore connector for the US Navy and Marine Corps

The Ship-to-Shore Connector (SSC) is being built to replace the LCAC. It will provide modernised means for the US Navy and Marine Corps to land on more than 80% of the world’s shorelines for the next 30 years.

With its amphibious lift requirement, the SSC will provide the surface assault portion of the US joint expeditionary manoeuvre warfare tactical plan, with the capability to project and sustain military operations from the sea, independent of tides, water depth, underwater obstacles or beach gradient.

Construction of an initial SSC test and training craft will be completed in 2017. The current contract includes options for up to eight production craft to be delivered to the US Navy by 2020.

International military customers may inquire about the future availability of the SSC via country-to-country military cooperation agreements.

Customers include the US coast guard, the Mexican Navy, and other international entities.

The firm’s 47ft, all-aluminium MLB has proven itself through more than 16 years of service as a platform with unparalleled stability, reliability, and survivability.

The MLB design combines many technological innovations. Its lightweight, rugged marine-grade aluminium hull is faster than its predecessors and can withstand impacts from 20ft, breaking waves at three times the force of gravity.

This design possesses an inherent self-righting capability. When pitch-poled or rolled into swells, the MLB will self-right in less than ten seconds, with all machinery remaining fully operational.

Common unmanned surface vessels for mine warfare and recovery missions

The CUSV utilises a modular architecture that accommodates platform reconfiguration and interchangeable payloads.

These boats are tested in the US and around the world. They are proven for missions ranging from cutter-boat, search-and-rescue and patrol, to interdiction, special operations, and assault.

Rugged aluminium construction, combined with cutting-edge hull forms and lightweight drive trains, enable these 3m to 18m RHIBs to deliver superior performance in the harshest of operating conditions, both in offshore and inland waterways.

The water jet-driven 12m RHIB is designed for coastal, riverine and special operations, including a wide spectrum of missions, from combat patrolling to interdiction.

The ten-metre outboard-powered RHIB is intended for coastal, harbour, and inland waterway operations and functions in a variety of roles, including high-speed maritime pursuit, search-and-rescue, routine search-and-seizure operations, and low-speed.