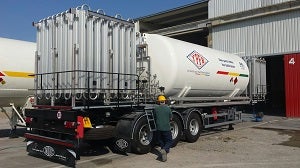 The engineering and technology group SENER participated in the official inauguration of a virtual gas pipeline in Bolivia, an event that took place during the morning of 15 February in Santa Cruz de la Sierra, in the Río Grande region.

Attendees included the Bolivian President, Evo Morales, the Bolivian Minister for Hydrocarbons and Energy; Luis Alberto Sánchez, president of the Bolivian National Oilfields company YPFB, who owns the installation; Guillermo Luis Achá, as well as various other local authorities. There to represent SENER were its general manager of power, oil and gas, Borja Zárraga, and the project manager, Ignacio Larrea.

As the leader of the EPC consortium, SENER carried out the design, construction and start-up of the virtual gas pipeline before finally handing it over to the client. This system comprises a liquefied natural gas (LNG) plant, a fleet of cryogenic transport tanks and mobile regasification plants, and various satellite regasification stations.

The plant produces 210t of LNG a day and has a storage capacity of up to 3,000m³, meaning it can supply natural gas to some 140,000 homes across 27 communities in different parts of Bolivia, including San Julián, San José de Chiquitos and Tupiza.

According to YPFB, the service will later be expanded so that 33 additional municipalities can enjoy the benefits of the virtual pipeline. Otherwise, these areas will have no access to gas, being set well apart from the traditional distribution networks, which are centered in the Santa Cruz and Potosí departments.

SENER project manager Ignacio Larrea declared: "This virtual gas pipeline is the first of its kind in Bolivia. It is an efficient solution to provide gas to many populated areas that are far from the national gas networks and which, because of their location, can only house a small regasification terminal. From now on, inhabitants of these areas can have natural gas in their homes, with quality service ensured by the good operation of the facilities we started up."

Through a dual nitrogen expansion cycle, the liquefaction plant generates LNG at -160°C and has a storage capacity for six days. In this liquid phase, the gas is loaded onto cryogenic transport tanks using tank lorry filling (TLF) and is delivered to 27 satellite regasification stations throughout the country. At these destinations, the LNG is stored in cryogenic tanks so it can then be distributed to the municipalities and vehicle service stations.

For this purpose, the liquid, once regasified, passes through a control unit, metering and odorisation station and then is sent through networks of gas distribution for final consumption: homes, industries with minor consumption, etc. This is what is known as household gas.

From its first engineering projects in the 1970s up to the present day, SENER has become one of the leading contractors for the gas sector, with past successes ranging from small and medium liquefying plants to major import, storage and regasification terminals, as well as storage tanks and small and medium terminals for liquefied natural gas (LNG). SENER provides its own technical solutions in all such projects.